Look to the Skies 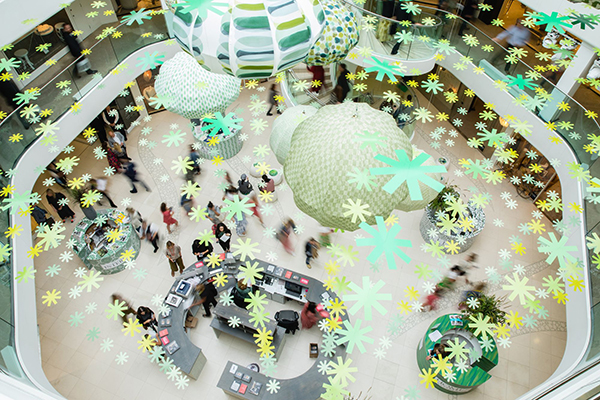 Filling the Centre Dome with its creative use of the latest fabrics, Focus/19’s Sky Garden aerial installation asserts how important greenery and nature have become to interiors. ‘Biophilia’ – love of nature – is the buzzword, and these suspended lanterns in the freshest new-season fabrics, with trailing fronds emulating seedpods spinning to the ground, strived to encapsulate the trend The sunlight-filled glass dome amplifies the feelgood factor that comes from bringing the outside in.

The full run-down of fabrics incorporated is as follows: ‘Les Coquecigrues’ by Pierre Frey; ‘Beaumont Indienne’ by Travers at Zimmer + Rohde; ‘Elliptic’ by Harlequin; ‘Madras’ by Galbraith & Paul at Tissus d’Hélène; ‘Bokhara’ and ‘Jaisilmir’ by John Stefanidis at Tissus d’Hélène; ‘Palm Isle’ by Jim Thompson; ‘Rainwater’ by Thibaut at Jacaranda Carpets & Rugs; ‘Maranta’ fabric by Villa Nova at Romo; ‘Oak’ by Morris & Co; ‘Sauvage’ by Zak + Fox at George Spencer Designs; ‘Matchsticks’ by George Spencer Designs; ‘Linwood’ by Blithfield at Lewis & Wood; and ‘Selenic’ by Harlequin.