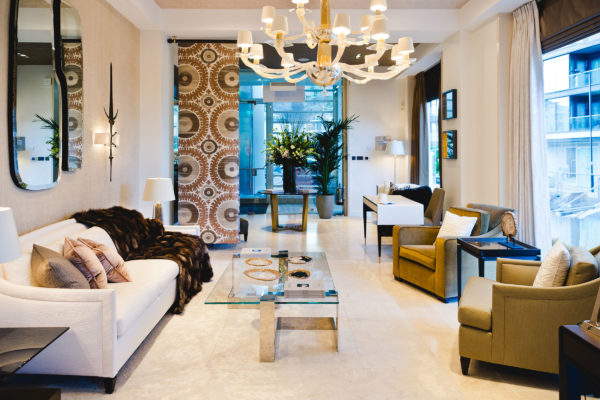 “There’s no ‘traditional’ and ‘contemporary’ any more: it’s about mixing things together,” says Nicolò Favaretto Rubelli. The CEO of Rubelli was in London to visit the redesigned Rubelli/Donghia showroom, which has been given a new lease of life by Studio Indigo: the design practice has followed his philosophy, mixing up highly traditional fabrics with contemporary ones, giving the new space a more eclectic feel that shows the sheer breadth of the company’s portfolio.

Studio Indigo founder Mike Fisher was already a longstanding Rubelli client and ardent admirer, and says: “I love Nicolò as well as his vision for Donghia and Rubelli, so we were really thrilled to be asked.” His understanding of the brand and where it needed to go next has informed the redesign. “It’s been freshened up, reorganised and restructured,” he says of the project. “It’s now more of a series of rooms, allowing Rubelli to stage various furniture scenes.” Fabric banners divide up these roomsets, which can be easily changed as each new season’s collection arrives.

A further big change sees the showroom staff emerging from their previously closed-off office space and now occupying a big, bright bay at the rear. “Today, service is more important,” says Rubelli. “You want to service a client’s needs.” He also points out another more welcoming touch: the relationship between inside and the outside has changed, so that where once furniture stood in the way of the windows, there are now clear sightlines honing in on the inviting roomsets.

As for the mixing up styles across the new showroom, Fisher says: “I look at the heritage of Rubelli and all those wonderful fabrics, and I’ve tried to bring them to the fore by mixing them in with the contemporary. People should feel that they can use the old and the new together to create their own unique look.”