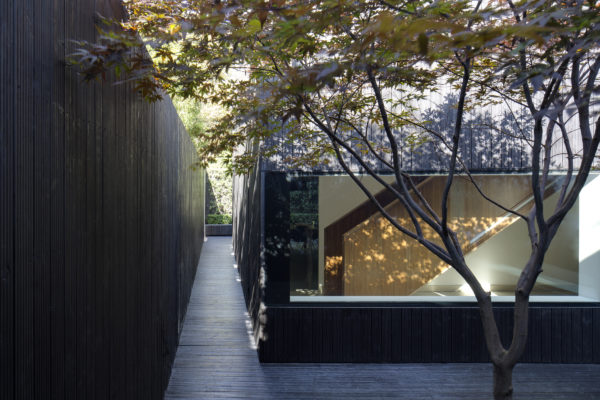 The announcement that Sir David Adjaye is the 2021 recipient of the RIBA Royal Gold Medal – one of the highest accolades in architecture in the UK – coincided with a Focus/20 Conversations in Design webinar that took a look behind the scenes at one of the world’s most original architectural practices.

Lucy Tilley has worked with Adjaye for more than 25 years, and now leads his London studio, directing prestigious commissions including major cultural, commercial and residential developments in the UK, Europe, Middle East, Asia and Australasia. The talk, with Elle Decoration‘s editor Ben Spriggs, saw her delve into the firm’s earliest work (such as Sunken House, pictured) as well as look ahead to some impressive forthcoming projects.

“There were three of us then and there are 180 of us now,” said Tilley of those first commissions. “We did some projects at the time I thought were ‘normal’ such as refurbishing existing buildings, but looking back we really tore those buildings apart, and really looked at how people were living in them.” For one of the first residential projects in St John’s Wood, completed in 2003, the practice completely opened up the back of the property to improve the connection between inside and out – the norm now, but a rarity then – and installed a 6m-long window that opened with the aid of a hydraulic ram, spending months getting the specification right.

Tilley puts the success of the practice down to its research-based ethos, and the way that it places people at the heart of everything, whether that’s creating a library that can also act as a community hub such as Whitechapel’s Ideas Store, or a major new cultural institution such as the Smithsonian National Museum of African American History and Culture in Washington DC. Never settling for the status quo is another strength: “It’s easy to repeat [things] and do what people know, but when you challenge that, and think of how it could be and how people would like it to be – that’s when you start to have a really interesting debate.”

The conversation also saw Tilley talk about future projects, including the National Holocaust Memorial in London and The Abrahamic Family House in Abu Dhabi, a multifaith complex where a mosque, church and synagogue will share the site.

As the scope and scale of the practice projects have grown, so have its obligations. “We have so much more responsibility than making a building that looks pretty,” concluded Tilley. “That’s why being a part of Adjaye Associates is so inspiring. Every project has an impact socially on our world, and that’s amazing.”